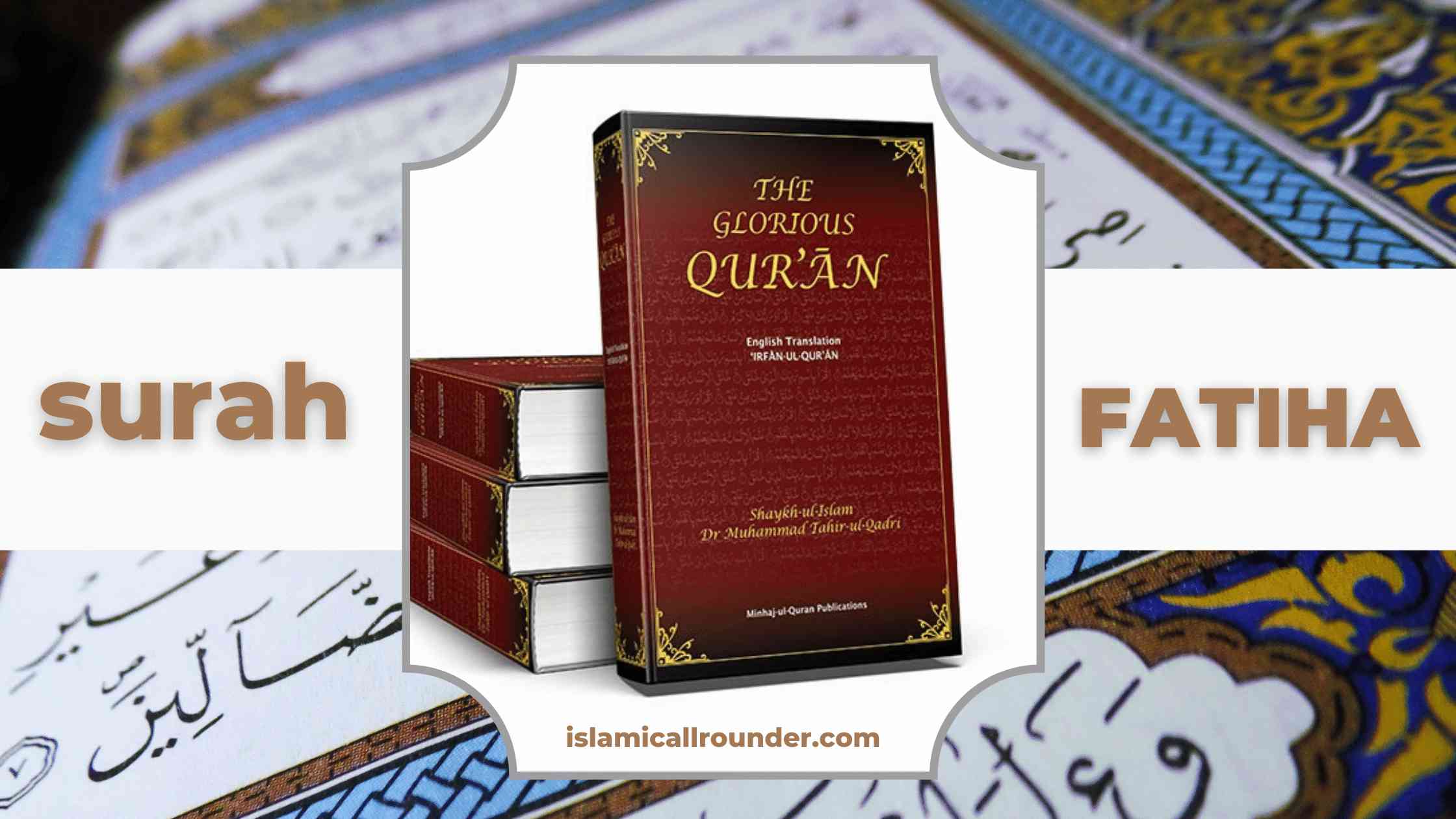 Surah Fatiha is the first surah in the Holy Quran which was revealed in the Meccan period of the life of Hazrat Muhammad (PBUH). The number of its verses is 7. It is known from reliable traditions that this is the first complete surah which was revealed to Holy Prophet (PBUH). Before that only miscellaneous verses were revealed which are included in Surah Al-Alaq, Surah Muzammil and Surah Muddaththir etc.

In this way the blessings of the Holy Quran will continue to be received. By reading, everyone can gain a basic knowledge of the Qur’an and Islam. One of the most important thing about Surah Al-Fatihah is that this Surah Al-Fatihah has also been made a part of prayers, so every Muslim recites it in the five daily prayers and he memorizes this Surah orally. Through this, every human being, whether literate or ignorant, continues to receive the blessings of the Holy Quran.

Considering the teachings of the Qur’an, it becomes clear that the main purpose of teaching the Qur’an is to get to know one’s God. Let him worship Allah so that he may have success in this world and in the Hereafter. So this teaching is described in Surah Al-Fatihah.

In the same way, if we look at the teachings of the Qur’an, we will find that the Qur’an describes obedience to God, obedience to God’s messengers, and belief in the Hereafter. And these three topics are also mentioned in Surah Al-Fatiha.

Similarly, one of the main aims of the teachings of the Qur’an is to reform man so that he may be successful in this world as well as in the Hereafter. The same subject is mentioned in Surah Al-Fatihah so that human beings can find a complete system for living a successful life. The seven short verses of Surat Fateha contain the teachings of the Qur’an. 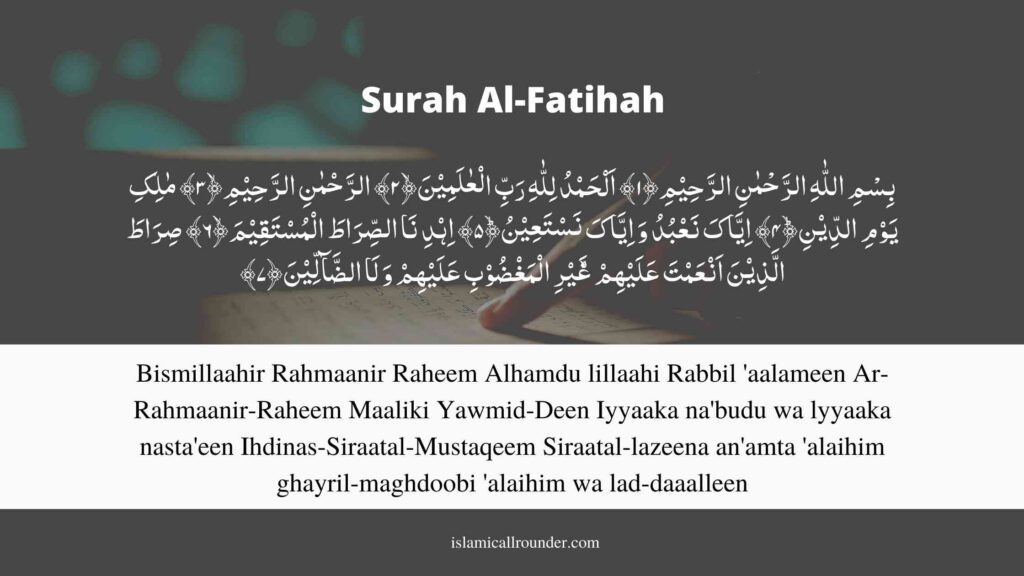 Allah has blessed man with innumerable blessings. It is stated in Surah Al-Fatihah that these blessings will be reckoned from man on the Day of Qayamat. Is man obeying Allah’s commands? Did man stay away from the deeds which Allah had forbidden, that is, man will be fully accounted for Resurrection day?

Therefore, it is necessary for man to believe that the source of all power is Allah, to rely on Allah in all circumstances, and to believe that without the person of Prophet Muhammad, he cannot recognize Allah, and Correction of all one’s deeds is also in the teachings of the Prophet.

Translation of surah Fatiha in English: 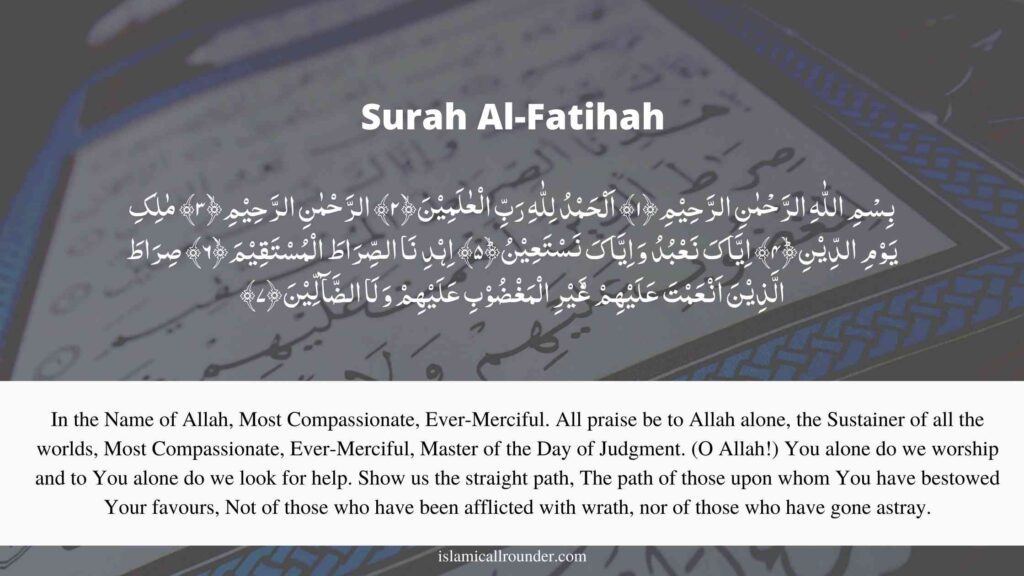 From this we know that if a person believes that the purpose of all his deeds is only to please Allah, then he will surely move towards success. The most important thing in this is that man should always be accountable Be prepared for it. He should know that he will have to answer for whatever he does.
If he works without this concept then surely all his hard work will be in vain. Man should follow the life of successful people and stay away from bad people for guidance in his life. These are the teachings of Surah Al-Fatihah. I have stated. Just now we know surah Fatiha with translation now we know more about it :

In this article we have learned: