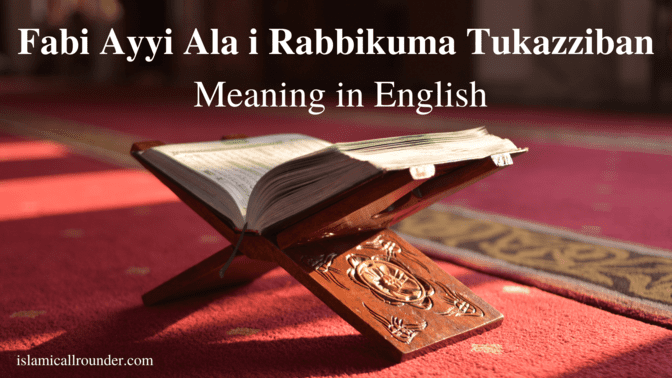 Fabi ayyi ala i rabbikuma tukazziban Is a verse of Surah Ar-Rahman, which is called the bride of the Qur’an. The name of this surah is one of the attributes of Allah which is taken from the first word of the surah.

In Surah Ar-Rahman, some blessings of Allah Almighty are mentioned in this world and in the hereafter and in this surah, the nature and characteristics of resurrection and the method of calculation of deeds have been explained.

There is a famous story of Sheikh Saadi that when he reached a city, his shoe was torn and he could not afford to buy a new one. So they were very sad that in spite of so much grace and perfection, Allah has kept them in such a condition that there is no shoe in the foot.

As they entered the city mosque, they saw a man who had no feet. Seeing this, they fell down in prostration before Allah, the Lord of Glory, and gave thanks to Allah, saying that if there is no shoe, then what is the matter with the feet, whereas this poor man has no feet.