In the last part of the Quran there is a surah called surah Qadr. This is a very important laylatul Qadr surah in which it is stated that Allah has revealed the Quran on the night of Qadr and this night has been declared better than a thousand nights. On this night, Allah Almighty revealed His valuable book, “For the Valuable Ummah, through the Noble Prophet” that is why the word Qadr appears three times in this surah al Qadr.

Laylatul Qadr has been kept secret, so that the servants of Allah, in search of Laylat al-Qadr, can wake up and spend every odd night of the last ten days of Ramadan in worship, because Allah Almighty loves to keep His servants awake in worship. Allah has kept many other things hidden. For example, the guardian of Allah has been kept secret so that people may think that this is the guardian of Allah, respect and honor him.

The hour of the Friday prayer is accepted so that Muslims can pray every hour of the Friday that this may be the hour of acceptance. He kept the time of death hidden so that man should always be engaged in good deeds and abstains from evil deeds so that death should come to him while doing good deeds and not death should come to him while doing evil deeds which God did not want. 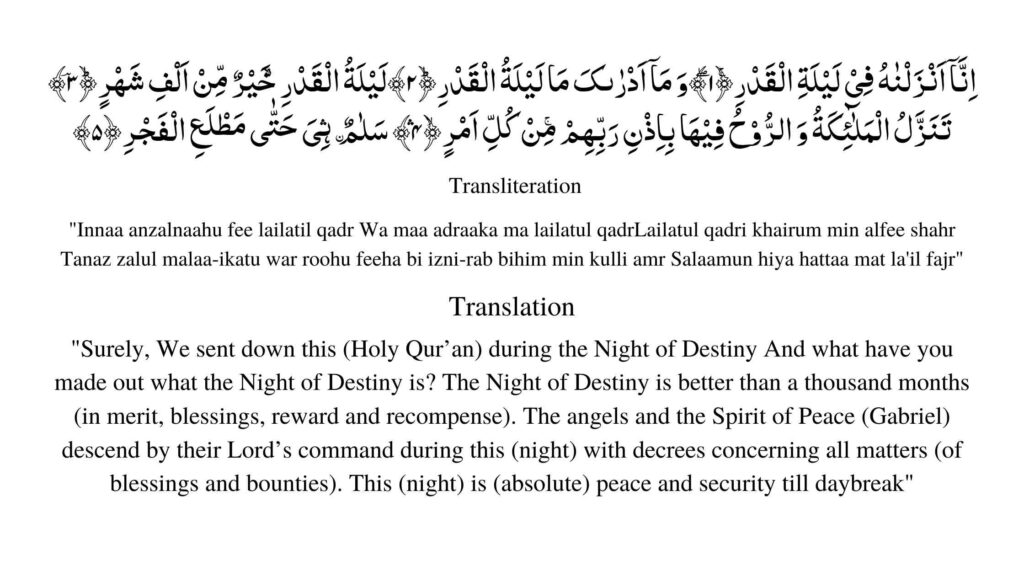 His intention was that people should not sit and lean on one night, otherwise they would have known that Laylat al-Qadr is in Ramadan and in the last ten days of Ramadan, and most likely it is the 27th night of Ramadan. Then he swore without saying Insha’Allah that Laylat al-Qadr is the 27th night of Ramadan. I said: O Abu Al-Mundhir! What is said on what basis? He said, ”  Holy Messenger of Allah has told us, and that is that after the night when the sun rises, there are no rays in it.”

Hazrat Abo Horaira  says about surat al Qadr that the Hazrat Muhammad (PBUH) said: Whoever worships on Shab-e-Qadr In the act of doing good, one’s pre-existing sins are erased. Worship has been instructed during Laylat al-Qadr hours. Worship is only for the pleasure of Allah Almighty. And let him promise next time that I will not commit any evil. Therefore, this night becomes forgiveness for the servant who worships with this glory.

It is narrated on the authority of Hazrat Ana’s (RA) al Qadr surah that the Holy Prophet (PBUH) said: On the night of Qadr, Gabriel descends in the company of angels, and greets every servant who remembers Allah. When the day of Eid-ul-Fitr comes, Allah says to the angels: O my angels! What should be the wages of a laborer who completes his work? They say: O Allah! His reward is that he should be paid in full. The Almighty says: O angels! My servants have fulfilled my duty to them.

The Almighty said: I swear by my honor, my glory, my grace, my height and my exaltation: I will surely accept their prayers. Then He says (to His servants): Return, I have forgiven you and turned your evil deeds into good deeds. He said: Then these people return to their homes with forgiveness.

The Prophet (PBUH) said: Keep reciting the Qur’an as long as you are fully absorbed in it. And when your body is tired, stop reciting for the time being to relax.

Hazrat Mu’awiyah wrote to Hazrat Abdul Rahman ibn Shibal that he should teach the people what he had heard from the Hazrat Muhammad (PBUH). So he gathered the people and said to them: Surely I have heard the Hazrat Muhammad (PBUH) say: Learn the Qur’aan, so when you learn (the Qur’aan), do not exaggerate in it. And do not separate from it, and do not consume (people’s wealth) through it, nor increase your wealth (through it).