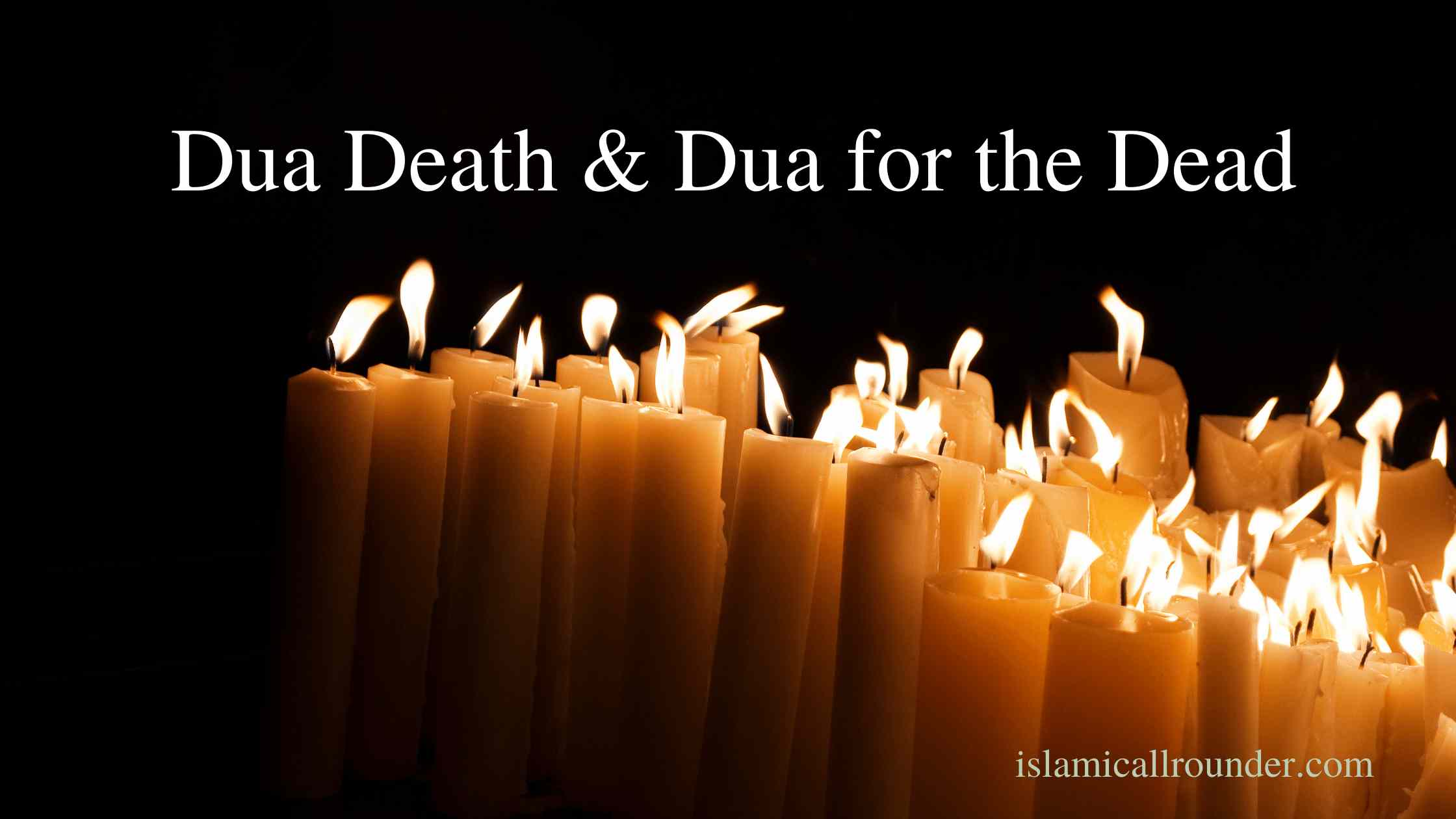 Reading the Qur’an and giving forgiveness brings reward to the deceased. And at the same time the reader gets rewarded. So don’t waste time reaching the graveyard. Instead, recite the Qur’an and ask forgiveness dua death for them. Hazrat Muhammad (PBUH) said: Ask forgiveness for your brother, because he will be asked right now.

It is narrated from Hazrat Abo Horaira dua for the dead that Hazrat Muhammad (PBUH) said: Verily, Allah will raise up in Paradise the rank of His righteous servant, and then the servant will say: Ya Allah! Where did I get this? 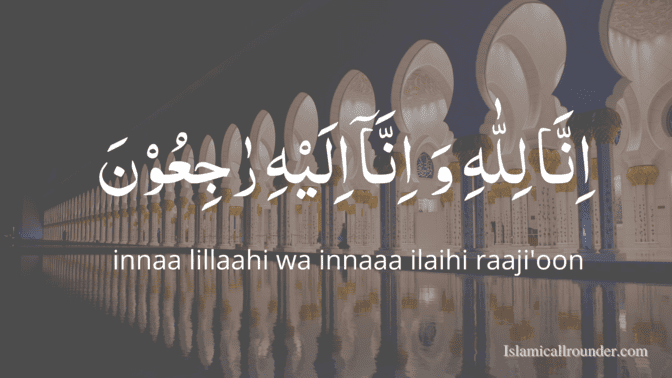 The mother of Hazrat Saad bin ubadah (RA) passed away and she was not present at that time. He pleaded in the court of the Prophet: Ya Rasool Allah! My mother has passed away and I was not present at that time. If I do any charity on her behalf, will she be rewarded? Hazrat Muhammad (PBUH) said: Yes. Hazrat Saad pleaded that I would call you as a witness and say that my garden called Makhraf is a charity from him.

Dua for Someone Who Died 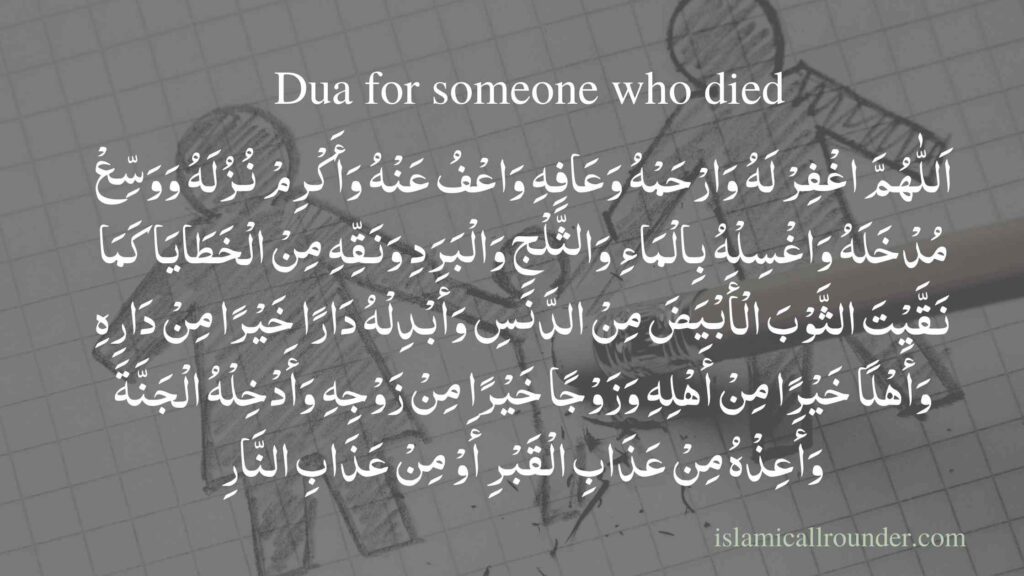 “O Allah! Forgive him, have mercy on him, heal him, forgive him, honor his coming, widen his place, wash away his sins with water, snow and hail, cleanse him of such sins, As the white cloth cleanses the dirt, give her a better house in return for this house, give her a better wife than her family, give her a wife better than this wife, admit her to paradise, protect her from the torment of grave and hell Say”

Dua for Those Who Passed Away 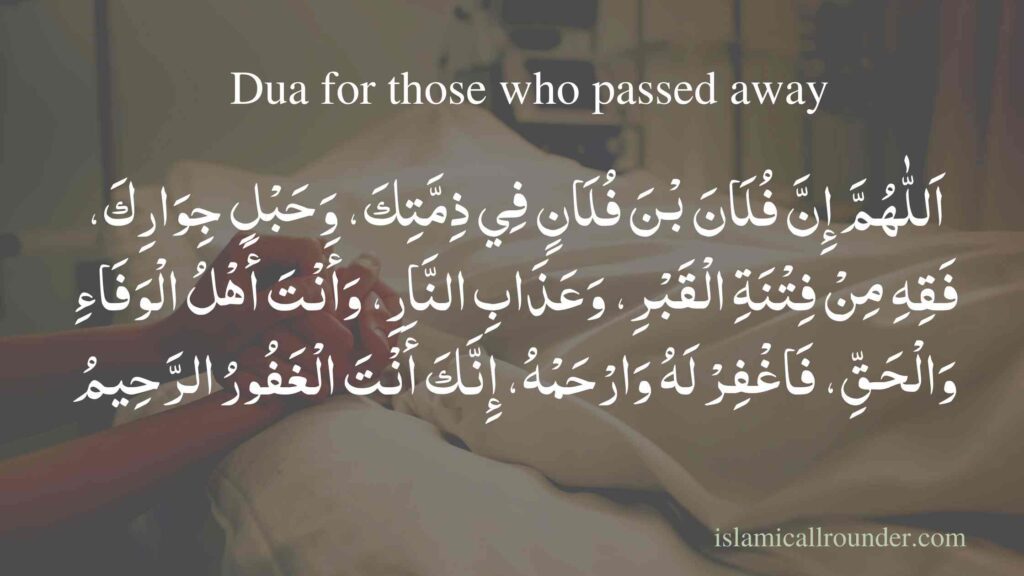 Hazrat Muhammad (PBUH) said: When a person gives voluntary sadaqa and does it on behalf of his parents So his parents get his (full) reward, while his own reward is not diminished.

Dua for Someone Passing Away

“O Allah! You are his Lord and You have created him and You have shown him the way to Islam and you have taken hold of his soul and you know its outward and inward. We have come to intercede for him. Forgive him”

It is narrated from Hazrat Abu Jafar (RA) that Hazrat Hassan and Hussain (RA) used to free slaves on Hazrat ali behalf after the death of Hazrat Ali (RA).

when Hazrat Muhammad (PBUH) passed by two graves, he said: These two dead are being tormented . One of them was not careful with his urine. While the other used to gossip. Then Hazrat Muhammad (PBUH) called for one twig and tore it in two. One part installed on one grave and the other part on another grave. Then he said: As long as they are not dry, their torment will be lessened.

Hazrat Abdullah Ibn Abbas narrated du a for the dead that the Messenger of Allah said: The dead are like those who drown in the grave. He waits for the prayer to come from his father or mother or brother or friend. Then when a prayer reaches her, she is dearer to her than the world and all things in the world.

Hazrat Muhammad (PBUH) said: The example of a dead person in a grave is like one who drowns and waits for the prayers of his parents, brother or a friend. When prayer reaches him, he loves the world more than anything else. Indeed, by the prayers of the people of the world, Allah Almighty gives the people of the graves a reward equal to the mountains. The best gift of the living for the dead is to ask forgiveness and charity for them.